Den of Thieves: An Immersive Speakeasy

Den of Thieves takes place across all three floors of the Rendezvous, including its underground grotto and Red Velvet Lounge, with a performance that ebbs and flows at the whims of its guests. Schmooze with a cast of lovable villains, discover a dangerous world of secrets, or simply kick back and enjoy an evening of live music, burlesque, and immersive entertainment.

America’s most vaccinated city deserves America’s most immersive shows. In this unique interactive performance, audiences are invited to the raucous funeral of notorious Prohibition-era bootlegger, Roy Olson. In life, Roy was a criminal mastermind and owner of an illicit speakeasy: the Rendezvous. In death, his friends and family have come together to celebrate his passing and decide who will inherit the criminal empire he left behind. Three gangs of roving villains vie for control of Roy’s fortune, but it’s the audience who ultimately decides how the night unfolds.

Den of Thieves is the brainchild of writers Jerome Virnich (Listening Glass) and Julia Nardin (Dump Site), who met while producing shows with Seattle Immersive Theatre. Both Virnich and Nardin now work in the video game industry as professional worldbuilders at Bungie (Destiny 2), but their private events and adventure company, Cat & Canary, has allowed them to keep one foot in the performing arts.

“We want to invite audiences to take an active role in the performance,” says writer Julia Nardin. “Their actions and the allegiances they form with the characters who inhabit this world are the heart of the show.” 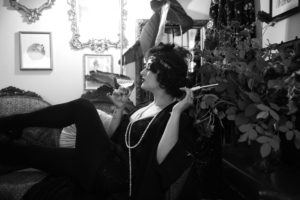