Wes Swing’s And the Heart does an impressive job of pushing into avant-garde without losing its center. The title track explores empty space and silence just as much as other tracks delve into the depth of full-band arrangements. While Swing has been known to juggle his classically tinged cello with straightforward acoustic balladry and indie-folk structures, “Mirrors” revels in flowing string arrangements. The entire sonic spectrum of the cello manifests through rapid staccato, full-bodied resonance and swaying legato to tremendous effect.
“Indie-classical cellist Wes Swing performs pop with modern classical influences” – The Washington Post

Eleanor Murray has spent the last seven years playing and recording music out of the northwest part of the United States. Her five albums and hundreds of live shows have established her as a prolific force in indie folk music.

“Eleanor Murray is impossibly good…To call her folky would be undercutting the beauty of what she does.” – SSG Music

“Ms. Murray is bound for greatness; anyone who sees her play live is, pretty instantly, a fan.” – Letters With Mixtapes
Alberta: Last year Dave Boone arrived in Seattle by way of Detroit, bringing with him a troubled mind and bruised singing voice—something like a Millennial Tom Waits with better elocution. So Says Wynona, his album of 21 spare, urban-rustic folk-blues songs recorded under the name Alberta, shines with dark, magnetic ambiance. –Jonathan Zwickel
21+ 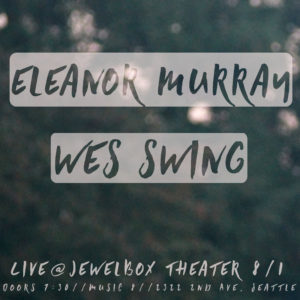