Stand Up Comedy for Dummies 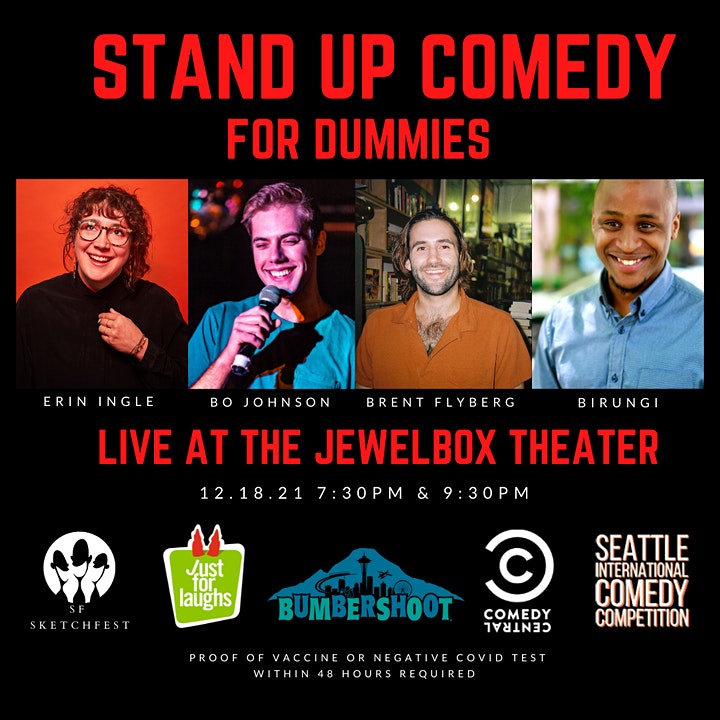 Brent Flyberg is a stand-up comedian from Seattle who has performed at comedy clubs, bars, and festivals across the US and Australia, including the Melbourne Comedy Festival, the Bridgetown Comedy Festival, and Bumbershoot. He lives in Los Angeles now. He doesn’t like you, but he does love you.

Erin Ingle may just be Seattle’s sharpest stoner and tenderest feminist, with comedy that’s equal parts joy and judgment. Erin has been performing stand-up since 2012 and currently features in clubs around the PNW. National touring is next on her list, following her performance at 2019s Laughing Skull Comedy Festival and on Comedy Central’s “Roast Battle II.” She’s a crowd favorite at bars and breweries all over, and has been seen on NBC, in the “Seattle International Comedy Competition,” at “SheDevil NYC,” “10,000 Laughs,” and “Laugh Your Asheville Off” comedy festivals. She hopes one day to be friends with someone who owns a glamorous boat.

Birungi is a Ugandan comedian based out of Seattle, Washington. Although he initially moved to America for college, he quickly found a different way to fall into debt – stand up comedy! Within 5 years of performing, he has hit stages in multiple cities including Olympia, Bellingham, Portland, Denver, Boston, Phoenix, San Diego and Los Angeles. He has been featured on the “Best of the Fest” list at the Burbank Comedy Festival. Birungi also had the privilege of opening for DL Hughley (Original Kings of Comedy) at the Parlor Comedy club in Bellevue, an experience he describes the highlight of his comedy career.