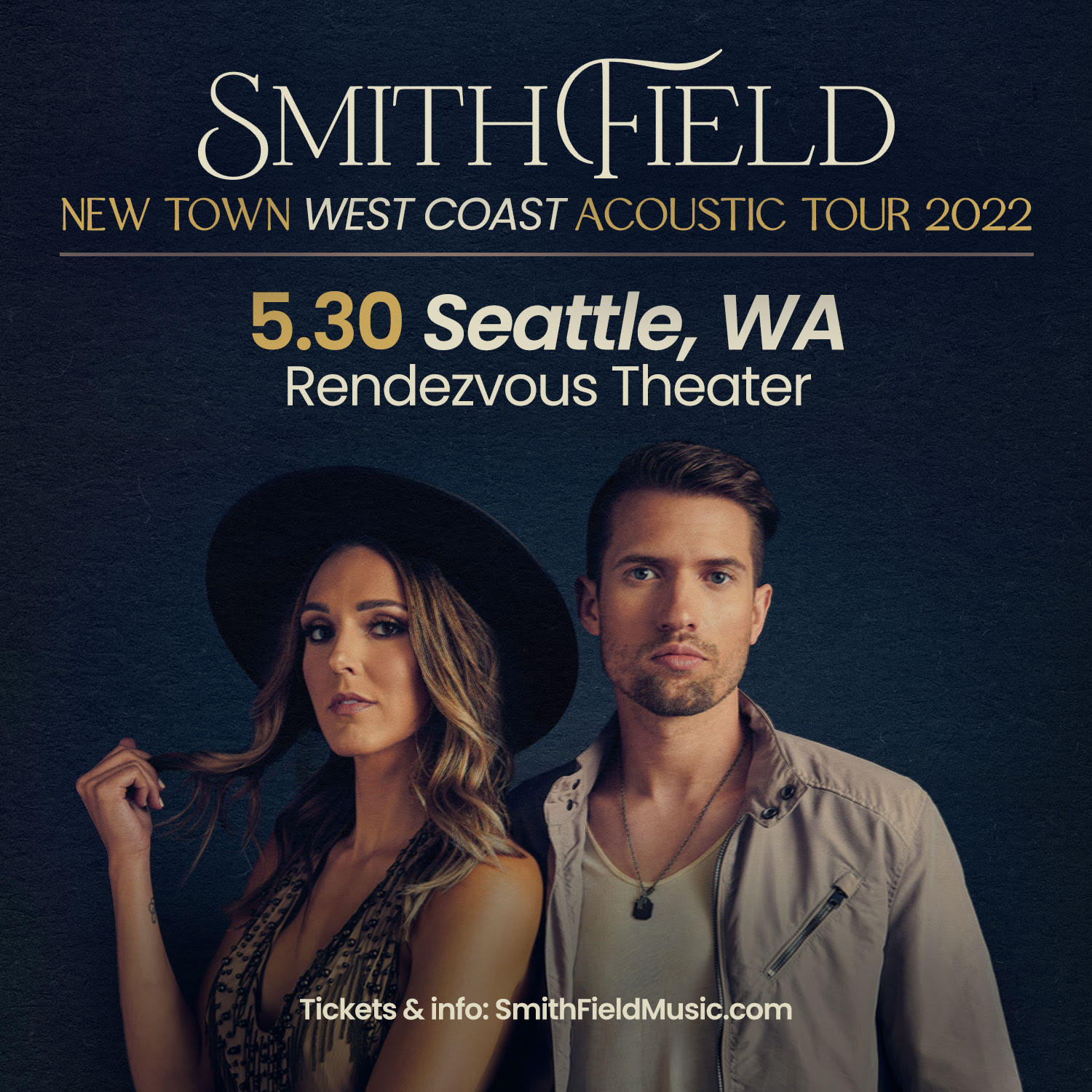 Rooted in stunning harmonies and sharp songwriting, SmithField is a modern country duo inspired by one of the genre’s classic traditions: the male-female duet.

It’s a collaborative sound that began in the small southern town of Waxahachie, Texas, where Trey Smith and Jennifer Fielder both grew up. Years before they shared the Grand Ole Opry stage as bandmates, the two shared meals every holiday season, brought together by a family tradition that began long before they were born.

“Our grandparents were old friends who went to high school together,” says Jennifer, who met Trey when she was 10 years old. “The families remained close over the years, and we’d have mutual parties every New Year’s Eve and Fourth of July. We’re the third generation of that connection.”

Separately, Trey and Jennifer both launched music careers at a young age. A fan of Faith Hill and LeAnn Rimes, Jennifer began touring regionally at nine years old, singing traditional country songs at small-town Opry events across Texas. Meanwhile, Trey was raised on the guitar-filled sound of rock & roll, gravitating toward classic rockers like Boston and modern acts like the Goo Goo Dolls. Inspired by frontman Johnny Rzeznik, he began writing songs as a teenager and formed his first rock band in college.

SmithField formed in 2011, drawing not only upon the family history that bound Jennifer and Trey together, but also the musical influences that set them apart. From the start, SmithField’s music was a unique mix of the contemporary and the classic, blurring the boundaries between country, pop, and rock. “We grew up in the same part of Texas, but we come from different sides of music,” Trey explains. “That mixture is what makes it so unique. Even though we’re not related by blood, our musical bond stems from this longtime friendship. It’s created a bond that you can’t manufacture.”

There’s no lead singer in SmithField. No main songwriter, either. Instead, Jennifer and Trey split those duties equally, writing harmony-filled songs that explore love, loss, and life from both sides of a relationship. The two moved to Nashville in 2012, eager to carry the torch for country music’s rich legacy of male-female duets into the 21st century. It was there — in the same city that inspired classic collaborations between Dolly Parton and Porter Wagoner; Tim McGraw and Faith Hill; and Loretta Lynn and Conway Twitty — that SmithField fine-tuned their own brand of platonic chemistry. Songs like “Hey Whiskey” and “If It Ain’t You” rewarded the independent duo with major-label-sized success, including multiple appearances at the Grand Ole Opry, heavy airplay on satellite radio, 40 million digital streams, acclaim from Rolling Stone, and shows with fellow genre-bending country artists like Brothers Osborne, Scotty McCreery, and Old Dominion.

“Sunday Best,” a cathartic anthem about accepting a lover’s true self, nods to the societal expectations that Trey and Jennifer experienced while growing up in rural Texas. “We come from a place where people are always expected to seem as though they’ve got it all together, even if their life is in turmoil,” says Jennifer. “We took that idea and applied it to a relationship. It’s a song about loving someone for who they are, despite their imperfections.”

Another track, “New Town,” spins a breezy story of small-town romance. “That song reminds us of our hometown,” Trey explains. “You grow up thinking you know everything about this town, but then you meet that one person who flips the entire place for you and makes it feel brand new.” Meanwhile, “Something Sexy” combines late-night grooves and sultry lyrics into a tribute to country music’s rich history of romantic songs, “Burning Wings” takes a frank look at a doomed relationship, and “I’ll Never Stop” — the EP’s lone ballad — honors the ever-lasting memory of an old flame. Releasing in 2021, the EP mixes the fresh with the familiar, the modern with the old-school. It’s the best of both worlds, brought together by two songwriters who’ve spent the past decade building a bridge between genres and perspectives.

“We’re big coffee people,” says Jennifer. “Whenever we perform a song, it’s like we’re grabbing a cup of coffee together, and the audience gets to be the third person who sits down with us and hears the whole conversation. They get to hear both sides. They get to understand how both parties feel. You don’t get that perspective from a solo artist. We’re opening up our hearts from both sides of the story, and the listener gets to hear our coffee talk.”

“Each track tells its own story,” adds Trey, “but the entire EP weaves together to form a larger narrative about relationships. It’s all about the ups, the downs, and the persistence needed to fight through whatever comes at you. That’s our story, too.”