People You Don’t Know Do Stand Up Comedy: December Edition 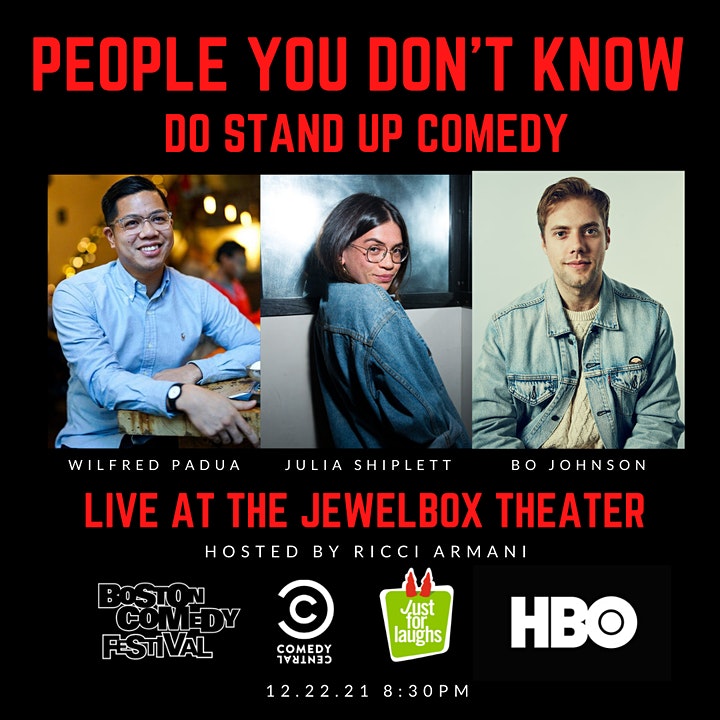 An evening of stand up comedy hosted by Ricci Armani (The Voice Champion @ Tacoma Comedy Club) and featuring:

Bo Johnson (Hart of the City on Comedy Central, Just for Laughs Montreal)

Julia Shiplett is a comedian, writer, actor and freckly bitch. Since finding her own distinct voice in comedy over the years, she has performed around the country and was named one of Comedy Central’s Up Next comedians and a TBS Comic To Watch. Julia has also been featured on HBO’s High Maintenance, HBO Max’s Love Life and HBO’s Crashing. You can find her published work in The New York Times, The New Yorker and McSweeney’s.

Wilfred Padua is a comedian and writer in New York who has an MFA in Writing from some place in Chicago. He was the winner of the 2019 Boston Comedy Festival, and a finalist in the Big Sky Comedy Festival. He has also performed at Bumbershoot, Bridgetown Comedy Festival, 10,000 Laughs, and SF Sketchfest. He was featured on NPR and Sirius XM, and was named one of the 50 Best Undiscovered Comedians in America by Thrillist where they said his comedy was “impish” for some reason.