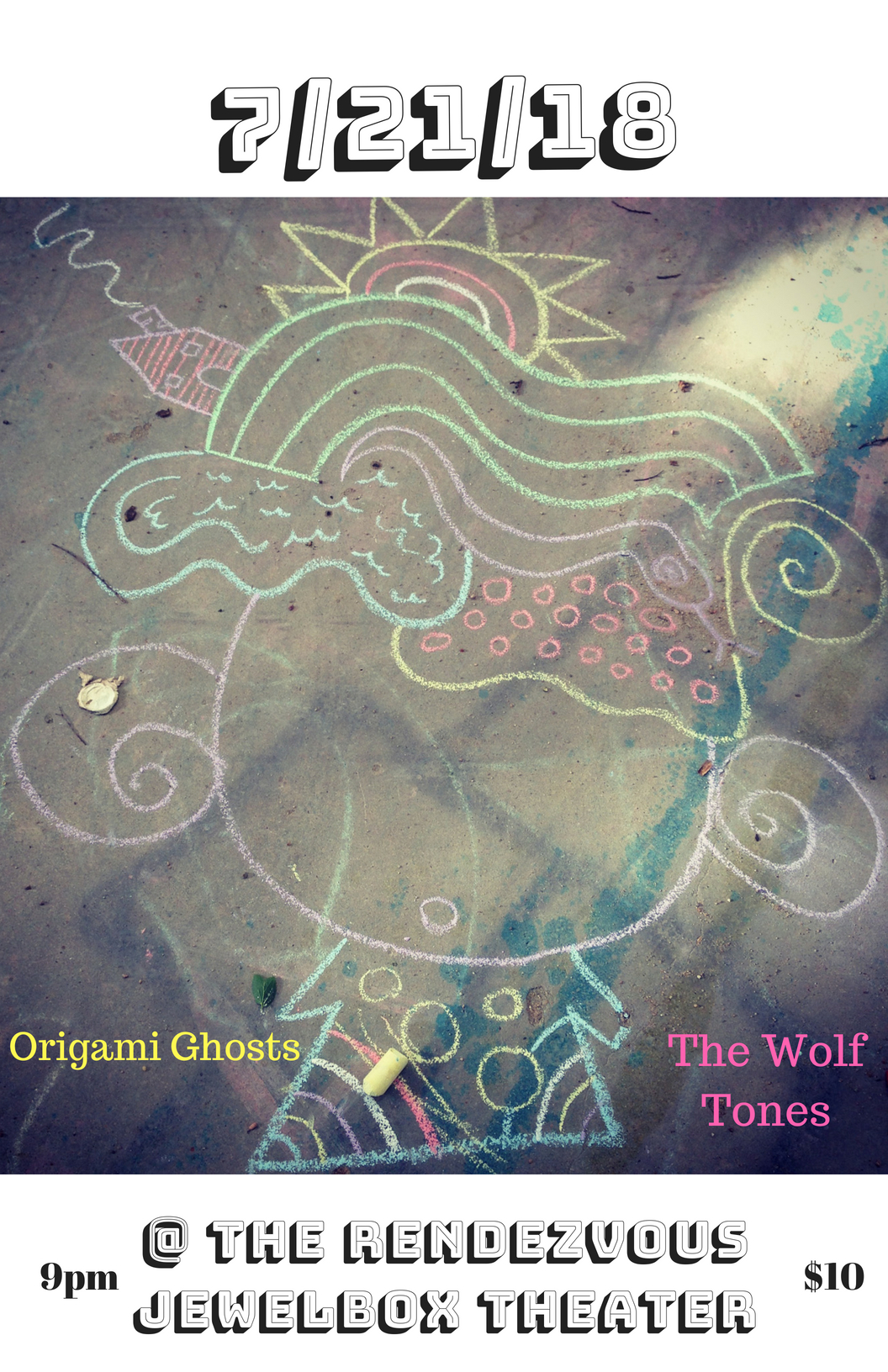 Origami Ghosts can be one — JP Scesniak — or many. The latter arrangement currently combines the sweet storytelling and songwriting of Scesniak with the magical synth, flute, and melodica playing of Cassandra Wulff, and the blazingly ambitious cello and drum shreds of Jacob Leavitt and Ben Kendall respectively. Experience the mind-bending hypno-folk of Origami Ghosts.

“Somewhere in between the anti-folk of The Moldy Peaches and the jangled guitar pop of Modest Mouse is It Don’t Exist, the third full length from 6-piece unit Origami Ghosts, chock full of hyper-earnest ballads, “meow/meow” refrains, and infectious, accordion-inflected indie rock.” — Gwendolyn Elliott, Seattle Weekly

“Origami Ghosts are the seashell-folk/gentle-indie project of Seattle’s J.P. Scesniak—you know, one of those bands where one person holds it down, but reserves the right to be joined by a few or a lot of friends. OG’s songs are intricate, with layers of strings, guitar, and accordion (tasteful accordion) coming together at the corner of “peaceful nature hike” and “busker beach bonfire.” The earnest lyrics and airy vocals remind me of Little Wings, with the shy melancholy of Carissa’s Weird, and a maybe a touch of stripped-down Pinback…” — Emily Nokes, the Stranger

Beth & Wulff was born out of love 45 years ago. They met at the University of Montana and have been together celebrating their passion for music ever since. Times have not always been easy as musicians, while raising a family and working in other fields over the years, but one thing has remained… the music of Beth & Wulff.

Beth Wulff has become a visible part of the Seattle musical community. She was one of the founding members of the Seattle Women in Rhythm and Blues as their keyboardist and featured vocalist, performing with Merilee Rush, Patti Allen, Duffy Bishop, Kris Shay Tanner, and jazz guitarist Emily Remler among others. She has performed with Motown legend Mary Wells, soul singer Al Wilson, and local legend Rich Dangel. Her keyboarding and songwriting can be heard on numerous CD projects.

Montana’s limited venues lead Beth and Jim Wulff out on the road, and eventually they worked as a house band at a local club on Bainbridge Island in Washington. After eventually moving to Seattle, Jim continued working as a drummer and vocalist with Beth and other area musicians, including the late Kevin Wallace, the late Rich Dangel, Paula Maya, and Stacy Jones, as a founding member of the blues band Stacy Jones and the Wolf Tones. Jim is featured on the recording “Red Dirt Road” as a drummer, songwriter, and vocalist. He is currently performing as a solo vocalist in numerous area venues, and his CD “Songs From the Past” is available at his performances and online.

Margo Lauritzen writes songs about bicycles, trains, and ferry crossings. She likes to play with character, chance (eg. dice throwing), and story form. She views her songs as pieces of a larger visual and poetic narrative with infinite variation.
+ Add to Google Calendar+ Add to iCalendar