Join Portland’s nerd-folk band The Doubleclicks and comedian/writer/internet funny-man Joseph Scrimshaw for #NerdNightOut, an evening of feel-good comedy for the nerd in everyone. Expect Star Wars, social justice, cats, and dinosaurs.

About the acts:
The Doubleclicks (http://www.thedoubleclicks.com/) are a nationally-touring, Billboard charting nerd band with a cello, a meowing cat keyboard, and songs about dinosaurs, Cats & Netflix, space and Dungeons and Dragons. Their YouTube videos boast over 3 million views and have been featured on BoingBoing, Kotaku, the Huffington Post, and on NPR shows “Live Wire” “All Things Acoustic” and “State of Wonder.”

Joseph Scrimshaw (http://www.josephscrimshaw.com/) is a comedian and writer based in Los Angeles. A fan on Twitter once described Joseph as “geek flavored.” Joseph describes his own comedy style as “dry and crisp with a vibrant finish. Complements beef and dark chocolate.” I stole this from the side of a Franzia box.
Currently, Joseph hosts a comedy podcast called Obsessed on Feral Audio, co-hosts a Star Wars podcast called Force Center, and a monthly live comedy game show called HEADCAN(N)ON at NerdMelt in Los Angeles. He’s written for RiffTrax, Screen Junkies, and a bunch of cool TV, radio, and streaming shows that have all been canceled. It’s hard out there for shows. 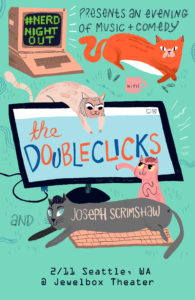