My Rear’s On the Sexy: A burlesque show named and inspired by neural networks! 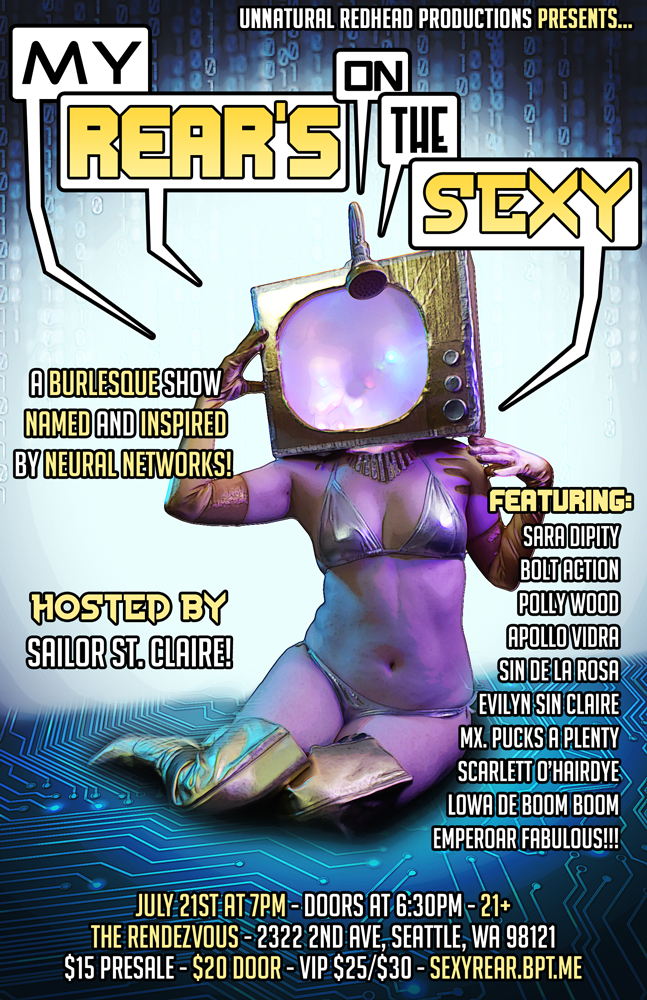 AI. Artificial Intelligence. The term brings to mind things like SkyNet, HAL, sentient robots turning against humanity and trying to wipe us out. In fiction, AI is almost always ready to exterminate humanity at a moment’s notice.

In the real world, AI sees eyes in pictures of cats, creates new Candy Hearts slogans like LUV 2000 HOGS YEA, and is obsessed with the word fart. Robots? They fall down. A lot. We don’t have to worry about AI rising up to destroy us. We have to keep pulling it out from under the couch where it got stuck again. Artificial Intelligence has one true skill: Dada-surrealist comedy. That’s exactly what My Rear’s On the Sexy has in store for you. It was named by a neural network and is bringing some top-shelf weirdness to the Jewelbox Theater on July 21st. What do computers think make good Halloween costumes? What happens if Googles Deep Dream sees something other than eyes when it analyzes photos? What the heck is a Fruit Bat Lesbian, anyway? Come get the answers to these and many other weirder questions at My Rear’s On the Sexy, a burlesque show named and inspired by neural networks!

Sponsored by the Mad Scientist Journal and Darkmoon Gallery!