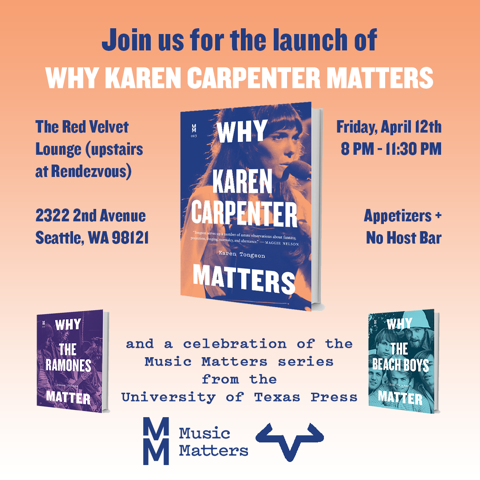 In The Red Velvet Lounge @ The Rendezvous

About WHY KAREN CARPENTER MATTERS

In the ’60s and ’70s, America’s music scene was marked by raucous excess, reflected in the tragic overdoses of young superstars such as Jimi Hendrix and Janis Joplin. At the same time, the uplifting harmonies and sunny lyrics that propelled Karen Carpenter and her brother, Richard, to international fame belied a different sort of tragedy—the underconsumption that led to Karen’s death at age thirty-two from the effects of an eating disorder.

In Why Karen Carpenter Matters, Karen Tongson (whose Filipino musician parents named her after the pop icon) interweaves the story of the singer’s rise to fame with her own trans-Pacific journey between Manila—where imitations of American pop styles flourished—and Karen Carpenter’s home ground of Southern California. Tongson reveals why the Carpenters’ chart-topping, seemingly whitewashed musical fantasies of “normal love” can now have profound significance for her—as well as for other people of color, LGBT+ communities, and anyone outside the mainstream culture usually associated with Karen Carpenter’s legacy. This hybrid of memoir and biography excavates the destructive perfectionism at the root of the Carpenters’ sound, while finding the beauty in the singer’s flawed, all too brief life.

Tongson is associate professor of English, gender and sexuality studies, and American studies and ethnicity at the University of Southern California. She is also the author of Relocations: Queer Suburban Imaginaries and the co-editor of the Postmillennial Pop book series at NYU Press. Her cultural commentary has appeared in the Los Angeles Times, the Washington Post, and other publications, and she is a panelist on MaximumFun.org‘s “Pop Rocket” podcast. Visit her website at www.karentongson.org.

About the Music Matters Series
Edited by Evelyn McDonnell

Music Matters is a new series of concise books that make outsize arguments for the meaning and legacy of a wide range of popular artists. These short, sharp polemics will make the musical, cultural, experiential, and personal case for the artists we love, all filtered through the consciousness of writers of distinction working in music criticism, journalism, academia, and literature.