Dicker Troy (Johnny Pemberton) and Josh Fadem are unlikely best friends. Josh is a hilariously effervescent physical comedian and character actor.
​
Dicker is from Bakersfield, has a very deep voice, and has been a union driver on motion pictures for 37 years.
​
The two guys met on set then started hosting a live comedy show with Josh as on-stage host/MC, Dicker as seated co-host/DJ.

“Kiss My Ass” consists of loud opinionated conversations between Josh and Dicker that often end in a psychedelic musical act-outs, or weird spontaneous pieces of existential advice sometimes directed at random audience members. “Kiss My Ass” has played host to everyone from A-list comedians to first time comics, all of which receive the same treatment of being talked to during their set.

The result is a show that’s never the same and always madness. 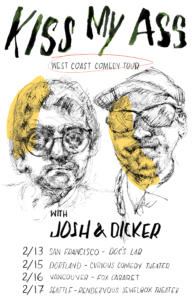