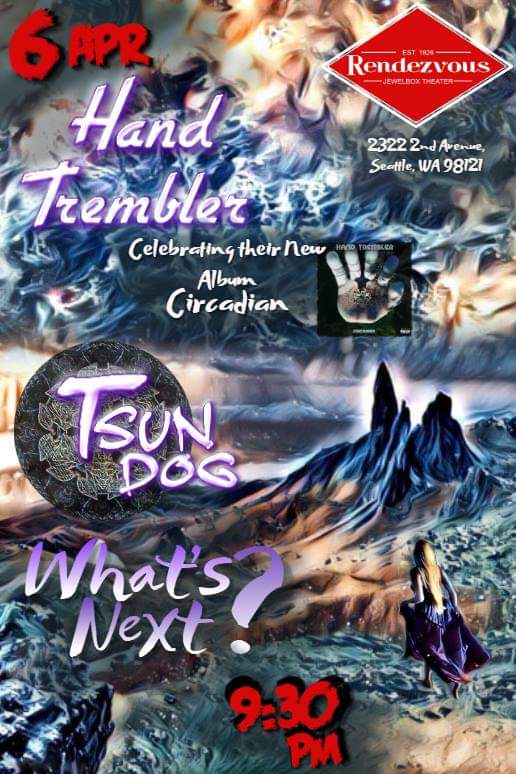 Hand Trembler never gets stuck in 4/4, and they incorporate elements of virtually every style of music, progressing through melodic, danceable rock to bluegrass, to Transylvanian rap, to Latin soul grooves.

All of this is accomplished with a true Pacific Northwest vibe. You can feel the pine trees rustling in the wind, the rain falling down the streets of the city, through the rivers in the mountains to the wet, overcast coastal shores.

Hand Trembler was started inside of a mountain in the Boise foothills at an abandoned bomb shelter around 2014. It has slowly evolved into that Paciffic Northwest sound that everyone loves. Our influences are broad from Radiohead, Modest Mouse and Tame Impala through rock gods of the 70’s like Frank Zappa and Pink Floyd. We play psychedelic tunes with unique, profound lyrics that were gifted to us from the 4th dimension.

“On desperate ground, fight.” – the Art of War

A 5 piece modern rock jam band comprised of sailors, artists, chefs, a mountain man, and general students of life. Every song tells a story about the larger world with observance to both light, darkness, and personal responsibility. Tsun Dog is a band of storytellers and adventurers.

The band borrows a bit of philosophy from Sun Tsu’s the art of war, “to make the best of both strong and weak and to make both serviceable” among others as well as the spirit of several world religions and personal philosophies. Help those you can, but don’t let others tear you down.

Seattle, Washington based What’s Next? is Andrea, vocals and keyboard, Rusty on vocals and guitars, Doug on bass, and Matt on drums.

What’s Next? was born of necessity to adapt to the venues from tiny to large in Switzerland. Our music is vocals driven and the singers have the skills to bring an eclectic mix of styles to life – thus, our name! Not afraid of a challenge, we participated in CERN Open Days 2008 Globe Show, to the likes of Nobel laureates, professional entertainers, and some of the greatest minds of our time. The program was broadcast by satellite to a worldwide audience, estimated to number 750,000 viewers!

What’s Next? released their first recordings on the “Resonance: Music from the ATLAS Experiment” CD, released by Neutralino Records in 2010 (available on iTunes)