Elicia Sanchez at The Jewelbox Theater 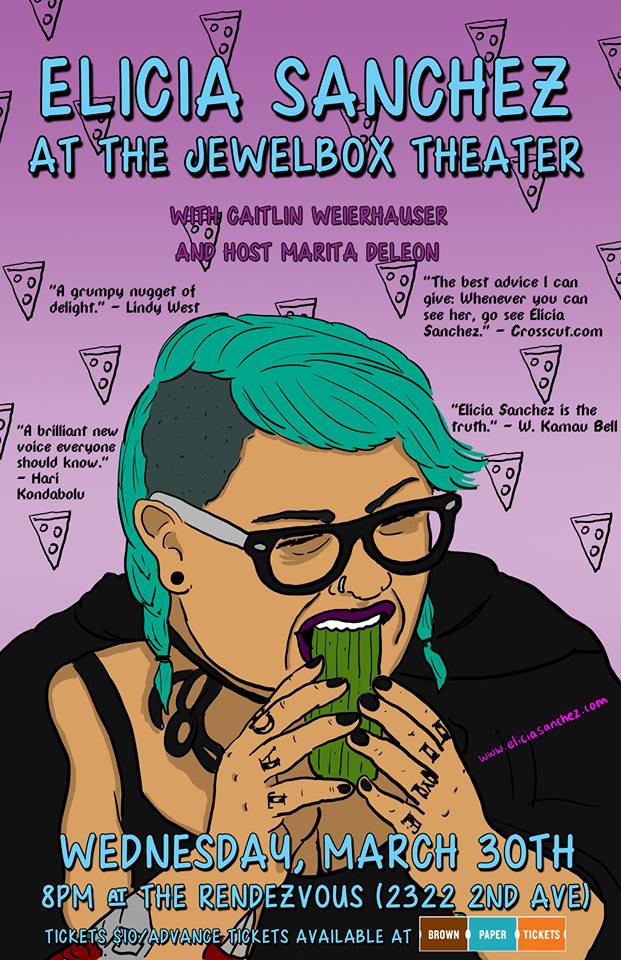 A Seattle-based comedian, writer and comic book reader, Elicia Sanchez has been performing all over the West Coast since 2010. She has been called “fearless” by City Arts Magazine, “a grumpy nugget of delight,” by writer/activist Lindy West, “a local favorite,” by The Stranger and “a brilliant new voice everyone should know,” by comedian Hari Kondabolu. Grammy Award winning singer/song-writer Kimya Dawson (The Moldy Peaches, Juno) has cited Sanchez as her ‘favorite underground Northwest comedian’ while W. Kamau Bell, comedian and creator/star of the critically acclaimed FXX series Totally Biased with W. Kamau Bell, once said, “Elicia Sanchez is the truth.” Elicia has performed at the Bridgetown Comedy Festival, Bumbershoot, Emerald City Comicon and has appeared on NPR, The Bob Rivers Show and the television show “The [206].”

From Crosscut.com, “…Elicia Sanchez is a special comedian; with unparalleled storytelling, quick wit and a bubbly demeanor, she can make magic out of any moment. Whether hosting The Moth, doing stand-up or hosting her own show, she’ll have you laughing the whole night and youll want to be her friend. The best advice I can give: Whenever you can see her, go see Elicia Sanchez.”