Brent Flyberg Presents an Evening of Stand Up Comedy 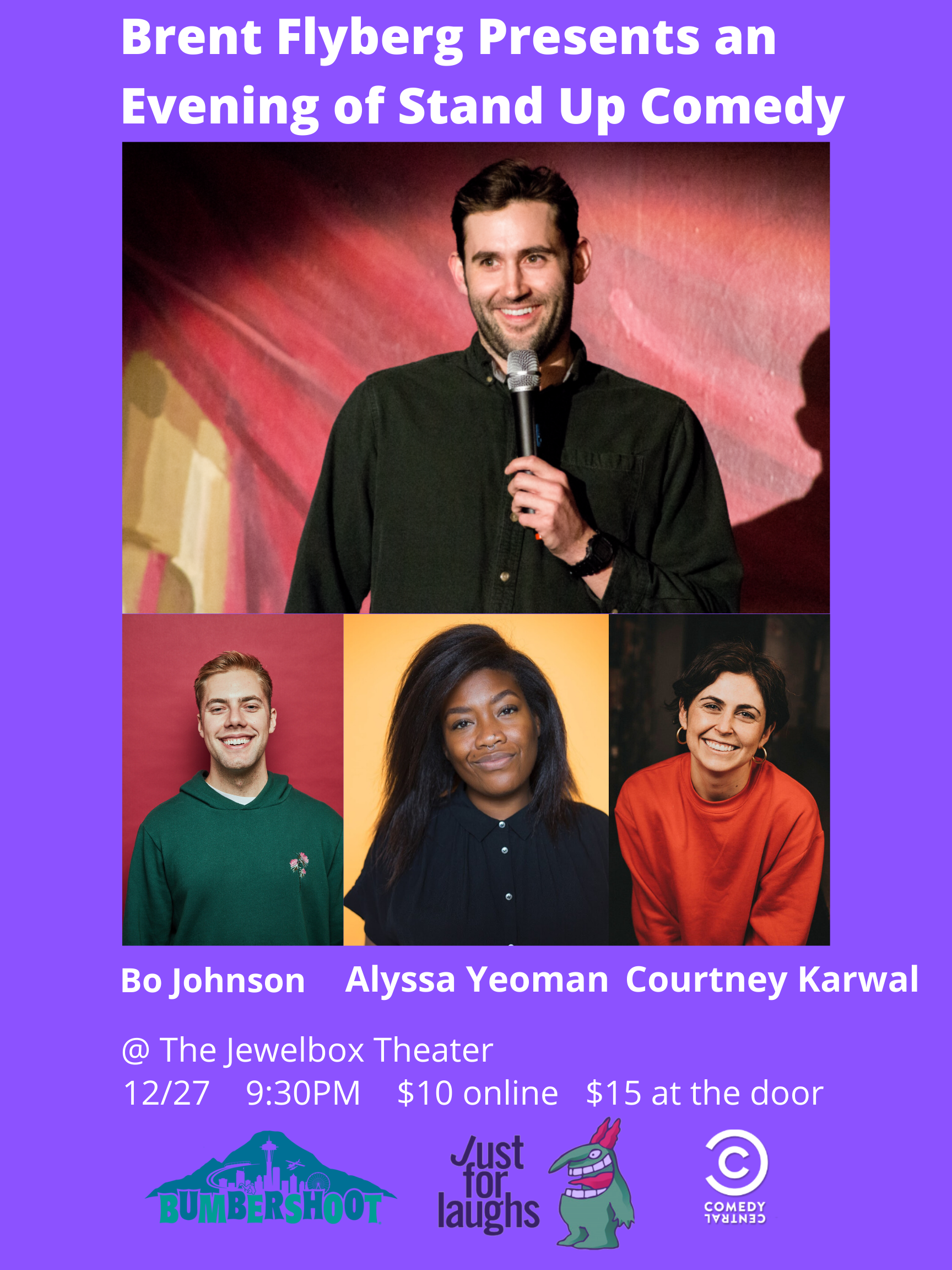 Brent Flyberg presents an evening of stand up to close out 2019!

Brent Flyberg is a stand-up comedian from Seattle who has performed at comedy clubs, bars, and festivals across the US and Australia, including the Melbourne Comedy Festival, the Bridgetown Comedy Festival, and Bumbershoot. He lives in Los Angeles now. He doesn’t like you, but he does love you.

Alyssa is a co-host of the popular Leafly podcast, The Roll-Up. She works locally as a producer for Seattle’s QTPOC Is Not A Rapper, Unladylike at Comedy Underground and is the Regional Director for Don’t Tell Comedy. Alyssa is one the host of Seattle’s Moth StorySLAM. Alyssa has worked with Amy Miller, Esther Ku, Sara Schaefer, Janelle James and Rory Scovel. Alyssa has performed in Control Yourself, Minority Retort, Intersections, NW Black Comedy Festival, 10,000 Laughs, the Seattle International Comedy Competition, and Bumbershoot.

Courtney Karwal is a stand-up comedian and when she was seven she played little league baseball. Courtney’s a product of the LA stand- up scene, and currently studies at The Groundlings Theater. Courtney’s co-created a Funny or Die web series called Check Your Surroundings. Courtney was named a “Comic to Watch” at Riot LA Festival, and has been featured at Bumbershoot in Seattle, D.C. Comedy Festival at the Kennedy Center, SF Sketchfest, etc.

Bo Johnson is a comedian from Seattle, Washington. His stand-up appeared on season two of Kevin Hart Presents: Hart of the City on Comedy Central. In 2018 he taped a set for LOL Live! at the prestigious Just For Laughs comedy festival in Montreal. Bo was a featured performer in the 2017 Bumbershoot Music & Arts Festival, a finalist in the 39th annual Seattle International Comedy Competition, a performer in the Double Down Comedy Experience sponsored by Zappos, and the 2019 Life is Beautiful festival in Las Vegas. Bo has opened for Sarah Colonna and Lionel Ritchie. His prank video “Bo and Mathew Sneak into a Movie Theatre” went viral on Youtube and has also been seen on MTV’s Ridiculousness.