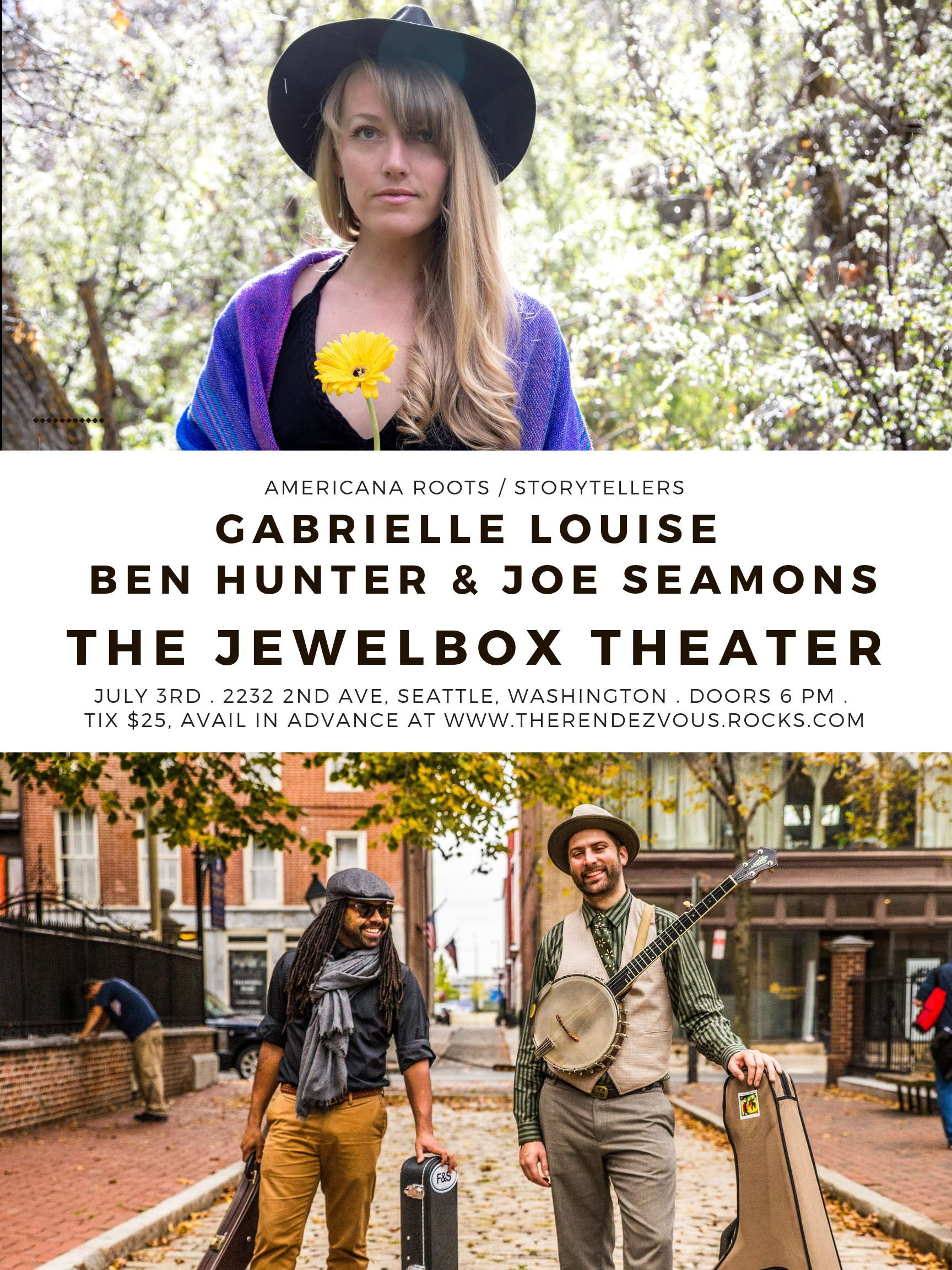 In concert with Colorado songstress Gabrielle Louise, Ben Hunter & Joe Seamons present an evening of songs and stories exploring how American roots music is enhancing the work of activists in urban and rural communities. In between original and traditional songs, you’ll learn how Seattle’s Black & Tan Hall, the heritage education of The Rhapsody Project, and the Hillman City Renaissance are developing new models for the artists to serve their communities.

Seattle songsters Ben Hunter & Joe Seamons give life to voices that have long been silenced in American culture. Their award-winning performances are highlighted by story-telling that, rather than bringing the past to life, vividly shows how the past still lives in the present. Through their songs, audiences witness current issues crop up again and again in folk songs, dance tunes, acoustic blues, and prison ballads. Ben & Joe bounce from fiddle & banjo breakdowns to a cappella field hollers, early jazz to gospel songs featuring Piedmont guitar style and rattlin’ bones. With the same versatility that won them the International Blues Challenge in 2016, and allowed them to record with National Heritage Fellow Phil Wiggins, the duo celebrates the ways Americans have triumphed over oppression through the vitality of their art. In May of 2019, the duo was recognized by the Ethnic Heritage Council with the Gordon Ekvall Tracie Memorial Award for excellence in ethnic performance and significant contributions to the development and presentation of the traditional cultural arts in the Pacific Northwest.

Gabrielle Louise is a nationally touring troubadour noted for her poignant lyrics and lush voice. The daughter of two vagabond musicians, Gabrielle inherited the predisposition to wanderlust and song. Her music is anchored deeply in folk and Americana, but undeniably drawn to rich harmonies and melodic adventurism. Her sound has the earthy feel of early Joni Mitchell while also veering into the spirited and versatile delivery of fellow genre-hopping artist Eva Cassidy. Known for her authenticity and candor on stage, Gabrielle’s performances are notably present and sincere, a professional presentation of her private creative world. Her story-telling and banter envelopes and enchants. Perhaps because of this quality, Louise has been entrusted to share the stage with greats such as Richie Havens, Tom Paxton, Joan Osborne, Eliza Gilkyson, and Guy Clark.

“Articulate and gifted…She executes a captivating balance of heartache and resolve.”
–David McGee, contributor to Rolling Stone and Spin